Suppose you are developing a Spring Boot client application that needs to communicate with a remote server API. You are for sure going to write a communication layer (let's call it Repository) between your application and the server, and you are going to test it in some way. So you need to simulate the server behavior i.e. responses and you have some ways to do this in a unit test:

But if you want to load the Spring context and build a sort of integration test, you have these alternatives:

I decided to exclude the Mockito approach because I wanted to build an integration test and I had time constraints so I could not spend much time in mocking the RestTemplate responses. So I went for the MockServer solution, also because I wanted to be able to launch the client application on my local machine and be able to open webpages and see some real mock data inside. So, basically I used the same approach both for my test and local profiles. The problem with this is that I needed to have two different configurations for the same bean representing the remote server, and they both had to stay in the src/main/java directory to be able to also run the application on the local machine, for example:

Moreover, to be able to run the MockServer also on the local machine, I needed to have it as a non test scoped dependency in my pom file. This had to be changed, and this post is about the solution I found.

I created this project as an example, so we have two profiles test and production, a repository supposed to communicate with a remote server API and the test class.

So, let's say that we have a ProductRepository that defines a findAll and a findOne methods, like:

Having @MockserverCondensedTestConfiguration specifying the test intent:

While in my application.properties file I have defined the remote server endpoints, with a the base url as a variable defined in each profiled properties file:

So now, if you try to run the tests, you will get this error:

That's because there is nothing, real nor mock, listening to that endpoint, and responding with something. To mock the response it is possible to use the MockRestServiceServer class, contained in the Spring test dependencies. Let's see an example and how I decided to change the approach of using it in a particular case: the ProductRepositoryTest class becomes like this one:

So for each test, you need to define the mock server expectations, and optionally you can define how many times the remote endpoint gets called in the single test. Tests are now green. This is already a big step ahead compared to the previous approach. But this is an example project, it contains just one repository and one test class with two tests. In my use case I needed to answer these two questions:

It became clear that I could not change each test and set expectations in each test. So I came up with a different approach.

Basically I wanted to define the expectations in just one place, like it happened with the MockServer. So I created this class, in the src/test/java directory, that is only active when using the test profile. Moreover I added this class to the one picked up by Spring when loading the context, so the @Bean is configured. Here are the resulting classes:

Of course I also removed the MockRestServiceServer stuff from the test class, so it is exactly as the beginning. This means that there is no need to change the tests already written previously, which, as I wrote before, could be hundreds or thousands. The resulting test class becomes:

Here we go with the final class:

Tests are now green. Here is the structure of the project at this point: 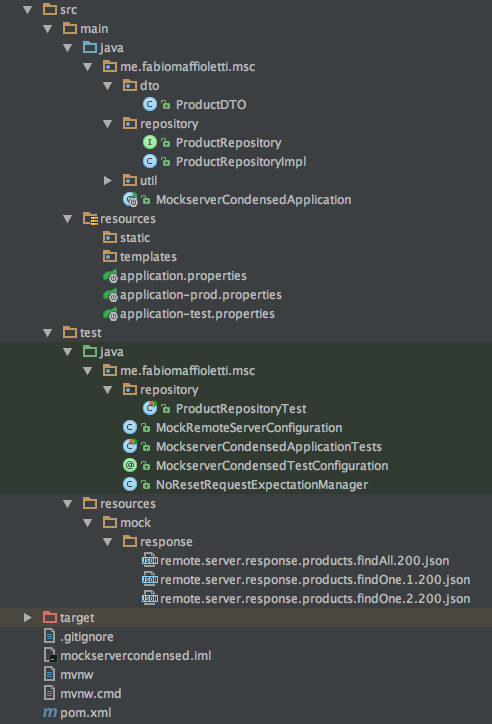 But we still have a problem, i.e. running the application on the local machine, with mock data, so avoiding the use of a real instance of the remote server. For this I will use WireMock in a docker container.

Using WireMock for mocking responses on the local machine

First thing to do is to pull the WireMock docker image: docker pull rodolpheche/wiremock. Then, of course, we need to create a local profile configuration (application-local.properties), that could be something like:

This means that we intend to run the WireMock on localhost and port 1888. That's why, from the project root, we need to run the docker image with this command:

Now if you go to http://localhost:1888/__admin/ you should see an empty mappings json. And in your project root directory there will be a stub directory containing mappings and __files: the first one will hold the mappings definitions, the second one the response bodies. For example, the mapping file for the findAll products endpoint could be something like this:

And the response, in the __files directory, something like:

Now, if the docker is restarted with docker restart mockserver and you navigate to http://localhost:1888/__admin/, you should see all the mappings defined. How to test that everything will be ok when the application will be running with the local profile? We need a controller to do that (let me skip the service layer and autowire the repository directly):

If you start the application and navigate to http://localhost:8080/products you should see the response coming from the WireMock server on Docker. Here is the resulting structure:

You can find the example project here